Br. Benny Kurian – Senior Pastor
Heavenly Feast didn’t have its origin from the idea or plan of an individual or an organization. On the contrary, it is a conflagration of revival ordained by the will of God engulfing the whole world. Soon after Dr.Mathew Kuruvilla’s (Tangu Bro) miraculous healing, his zeal and passion for Jesus Christ led him to stand on the streets and to go from house to house giving away tracts and talking about the love of Jesus Christ. Many of his old business colleagues thought he was mad to go on the streets and from house to house shamelessly for Jesus Christ. With no one to encourage him or to look up to for help, his full focus was his fellowship with Jesus and with the Holy Spirit. He used to visit the slums where many got transformed and started coming to his office for prayer. Slowly his office space began to be filled with those who were healed and transformed by Jesus. He had a great desire that even those who didn’t like him should know Jesus. Thus, he started to search for a public place where everyone could come and hear about Jesus Christ and the meeting was shifted to Pension Bhavan, a small hall in Kottayam.

A minuscule group that came together at Pension Bhavan in 1997 under the leadership of its founder-president Bro.Tangu, has now grown to a massive spiritual revival spreading like wild fire all around the world. Not having any intentions or plans even in their dreams, to turn it to a church or an organization, a handful of people spinning like a top in the stormy situations of their problems and difficulties, knelt down to pray ardently seeking divine help to pull them out of their whirlpool of worries. The Lord did hear their prayers. That was the humble beginning of Heavenly Feast and the rest is history.

Now the Heavenly Feast has become a household name in every nook and corner of the state, or to be more precise, the Lord made it so. Dr. Mathew Kuruvilla, better known by his sobriquet-Tangu, was running a chain of profitable business both in Kerala and the other neighbouring states. One day in 1995, as he was returning from Pune to Kerala along with his friends his brand new jeep collided head-on with a truck at a place called Karat. Bro. Tangu was seriously injured with a crushed spinal cord. Doctors told him the crushing fact that thereafter he would find it difficult to walk.

Hoping against hope, he was taken around by his family for all kinds of treatment but all was in vain. The accident shattered not only his bones but his dreams of building up a business empire too. As he was completely bed-ridden, his business started to crumble one by one pushing him to the brink of a severe financial crunch. Finally, as he was lying in bed in a semi-vegetative state with a massive debt choking his mind and soul, he came to know about a convention conducted by an evangelist who came from North India. He was taken to that meeting and was miraculously healed by Lord Jesus. That moment itself he was also released of his addiction to alcohol and other clinging sins. Immediately he accepted Jesus as his Lord and saviour.

With the good intention of sharing his joy and deliverance with others who were in similar situations, he, along with his family and Br Jake, the first person he had brought to Jesus, started a prayer meeting at Pension Bhavan. From the very beginning itself BroTangu focused on exalting Jesus and His mighty deeds. Soon, there started a flow of people to this spiritual get-together. It became a converging place for alcoholics, people suffering from all kinds of diseases, those who are heavily in debt, the depressed, the disillusioned and the possessed. Jesus healed them all. The good news spread like a prairie fire and the congregation started to swell.

Bro Tangu was neither a bible college graduate nor an expert in biblical doctrines but was ministering in the power and love of Jesus. He once made the acquaintance of Bro Thomaskutty(Dr. Thomas Abraham), according to the pre-ordained plan of God Almighty. Bro Thomaskutty, a famous bible scholar and a preacher, immediately realized the call and the anointing of God on Bro Tangu and also the vision he had for the perishing multitudes. Bro Thomaskutty, who had been yearning and praying with his family for a revival, was absolutely convinced that the Lord has placed Br Tangu at the forefront of a new revival. On the other hand, Br Tangu had been ardently praying for someone who has the same vision as his and also one good at sharing the word of God to the new believers to spiritually strengthen them. Thus, as Bro Tangu and Bro Thomaskutty, standing shoulder to shoulder, started ministering to the people from the word of God, the power of Jesus manifested in each meeting through wonders, signs and miracles. Everyone realized that the church was being taken to another level by the Lord.

It was during this time, towards the fag end of 1997, by the great grace of God, I was also able to join this congregation. We were utterly shocked to realize that our second son- Sachin, not much long after his birth, was diagnosed that neither of his eyes had sight. Doctors told us that as some of his optical nerves were irreparably damaged, there was no treatment available for his condition. The fact that the child would remain blind till his last breath came down on us- me, my wife Suja and my elder daughter Sanna – like a sledgehammer. We were thrown into the whirling vortex of distress and depression. This had almost pushed us to the verge of thinking about ending our lives. 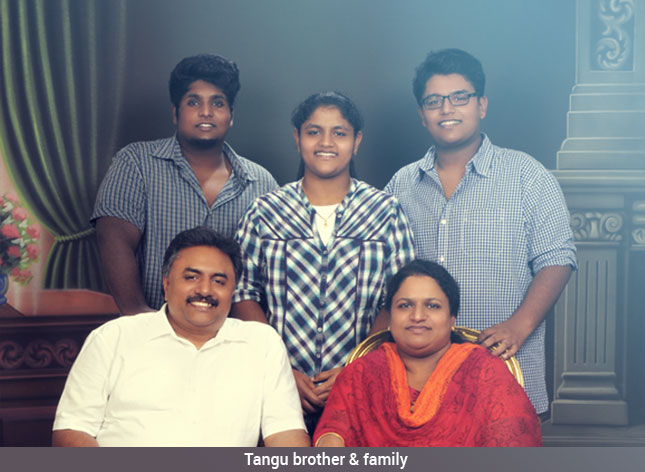 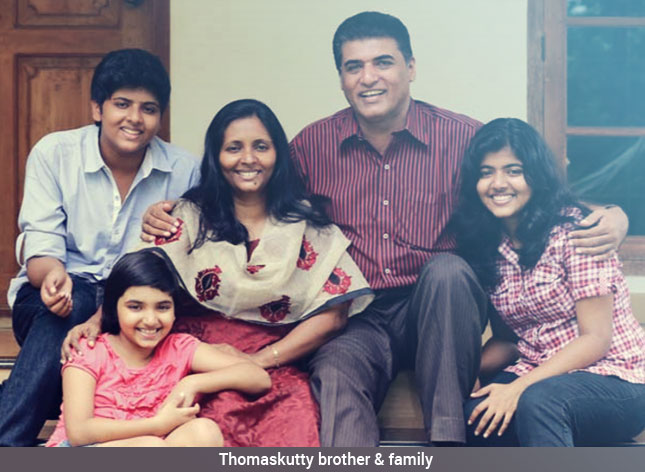 One of those bleak days, my wife’s sister and brother-in-law brought Bro Thanku and Bro Thomaskutty to our house. The moment they prayed over my child, Jesus healed him. Both his eyes were opened and he was able to see things around for the first time in his life. Now, Sachin, a bright student, is doing his graduation in Madras Christian College. Having realized that the Jesus who is spoken about in the Bible was not a myth or a story, we happily joined the prayer group led by Bro Tangu for further spiritual support.

Those days, the congregation was called Tangu’s group by the people outside. He was not very happy about that and said he was only an instrument that the Lord uses and it is Jesus who is doing everything in the church. One of those days while Bro Tangu and Bro Thomaskutty were attending a prayer meeting in Chennai along with some of the members of the group, a woman who was filled with the Holy Spirit, who was attending the same meeting, prophesied to them in English that the prayer group would be called the Heavenly Feast.

Soon afterwards, back in Kerala, a pastor also prophesied to Bro Tangu that through him the Lord would prepare a heavenly feast around the world. So this group was named as the Heavenly Feast. When I joined this prayer group, what attracted me most was Bro Tangu’s and Bro Thomaskutty’s unity, their mutual love, respect and obedience. Seeing them advising and correcting each other is a great example for us all to follow.

This has led to a more cordial relationship between the believers of the church. Therefore, just like what we see in the Acts of the Apostles in the Bible, when the believers in the Heavenly Feast stood together in love and unity, the Lord started doing more miracles in their midst. Thereafter people gushed forth from all corners of the land into the Church. Many notorious and fearsome criminals in the city accepted Jesus as their Lord and saviour and gave up their sinful life. Many chronic alcoholics turned to Jesus and were completely reformed. This brought peace to hundreds of families around the city. Houses which were once the cesspool of evil became worship centres. What a man or an organization or laws couldn’t do to transform people, the Lord Jesus started doing through the church.

These servants of God, instead of drawing people’s attention to themselves or to the church, spoke about and exalted only Jesus and exhorted the people to turn their attention only to the Lord. They never criticized religions, denominations, customs or rituals, but focused only on speaking about the Lord and his wonderful deeds in their lives.

Before long, the meeting was shifted to a more spacious building- Suvarna Auditorium- as the number of the new members of the church increased by leaps and bounds. In a matter of few months, that one also became full and started to spill over. From there the group moved to Karthika Auditorium and soon afterwards to KPS Menon Auditorium in the city of Kottayam.

As we read in the scriptures, Jesus’ fame spread everywhere through this group too. As His name was exalted all the time, the wonders and miracles He was doing in the church came to be known among the people of other states as well and even abroad. As a result, thousands of people came to church. As the Lord told Adam (Genesis 12.2) that he would make his name great, in the present time, He made Bro Tangu and Bro Thomaskutty famous in many nations and opened the doors of many countries for them. The Lord has sent them to countries in the Middle-East, China, Taiwan, Thailand, the United States of America, Singapore, the United Kingdom, Canada, Russia, Israel etc. Bro. Tangu attended many world famous Christian conferences and mega crusades as the main speaker. Even the parliaments of many nations were opened to him. 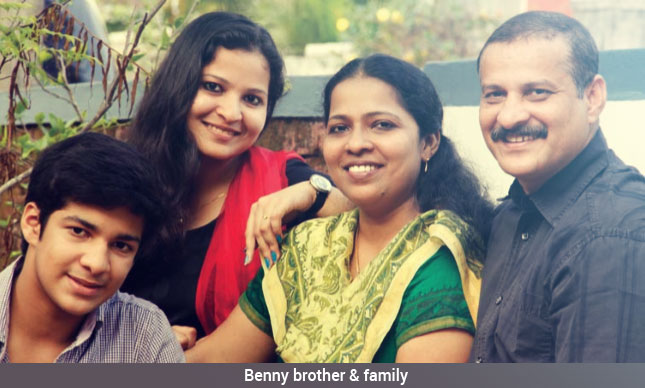 In the year 2000, the Lord Jesus helped the church to buy a land with a spacious building in it at Nattakom near Kottayam. However, in a few months’ time that one was also chock-a-block with believers. Hence, the church looked for a more spacious place. The search ended at a land in the heart of the city of Kottayam and the Almighty helped the church to buy that too. From Kottayam the Lord lit the fire of revival to many parts of Kerala.

Most of the believers of the Heavenly Feast are those who once rushed into these prayer meetings completely trusting Jesus that He would help them out from their burning problems in life: alcoholics and drug addicts who failed at the de-addiction and rehabilitation centres, people suffering from chronic diseases and are rejected from hospitals, those who were nose-deep in debt and on the brink of committing suicide, families on the verge of divorce, and criminals who yearned to turn over a new leaf in their life. Some came after knowing about the eternal life through Jesus. The Lord who said, “Everyone the Father gives me will come to me, and whoever comes to me I will certainly not turn away. (John 6-37)” relieved them of all their troubles and saved them. Now they stand witness to Jesus by sharing their joy and testimony with others as a minister of the church.

Every week thousands of prayer meetings such as care cells, prayer cells and spiritual get-togethers in houses are being held. Another reason for the growth of the church was that Bro Tangu and Bro Thomaskutty never tried their ministry to limit among themselves, but taught the people that whoever believes in Jesus can do the same work as they do. So thousands of anointed ministers are being raised in the church by the Lord Jesus. And the Lord is doing mighty things through them all. We have only one thing to tell the world… “Jesus is alive and we are the witnesses to this truth !”.